* Sioux term meaning "We Are All Related in the Sacred Hoop of Life."

Tripod Rock is a hundred seventy ton "glacial erratic" which perches atop three smaller boulders on the side of Pyramid Mountain, Morris County, NJ. It has been considered a spiritually significant site by local people for hundreds, if not thousands of years. The Rock is the largest of this type in the eastern USA. It sits somewhat south of the terminus of the last major glacier, thus, it dates back at least two glacial cycles, or over 100,000 years. The local legend is that it was levitated into position by Native Medicine.

The Summer Solstice Sun sets between the marker rocks as sighted from the second bedrock outcropping. It is said that the Tripod Rock Spiritual Energy Vortex reaches maximum energy at this time. Every year at the Solstice hundreds of people are drawn to the site for a spontaneous sunset observance.  While this pilgrimage is listed on several new age and neo-pagan sites, it remains a truly spontaneous expression of native spirituality and is not coordinated or sponsored by any organization, including LifeSprirt Center.

We ask that all participants treat this wonderful natural site as an open-air Temple and respect its quietude.  It is an extraordinary place to meditate, manifest and pray.

Think, then, of the Shamans who have preceded you at this Sacred Place, for the eons that it has been a Source of Spirit.  Connecting to this Place is also possible by meditating with photographs of it and by remembering that all places on this precious Earth are sacred.

All Circles are One Circle.

People who are sensitive to such energies state that they experience a strong sensation of peace and power at the site. It is considered to be part of a ley line connecting to the Montauk pyramids and then to the ancient site of Atlantis. As people once again approach Tripod Rock with reverence and love, the Energy Vortex is powering up for the needs of a New Age.

On a memorable (and stormy) Fall Equinox evening in 1995, representatives of certain Elders of the local Native People (with some LifeSpirit new agers tagging along) spiritually cleansed the energies of the site, reopening the protective vortex after centuries of desecration. It is said that the "black magic" that broke the site's protection several hundred years ago also broke the protective ley line across Long Island and into the Atlantic, allowing the invasion of Turtle Island (North America) by Europeans.

When descendents of both sides cleansed the energies, returning certain cult objects to the site, a powerful Act of Reconciliation occurred, permitting, once again, the reopening of the energies of this Sacred Place.

You can reach the Rock by taking Interstate 287 to the Main St. Boonton exit, then head west about a half mile to Rte. 511 (Boonton Ave.) and then north several miles to Pyramid Mountain County Park which is on the left by the former Mars Industrial Park on the right. There are good maps available at the Park Office and the trails to the Rock are well blazed.

The easy hike to the Rock takes about a half hour. If you make the Solstice Pilgrimage, remember to carry a flashlight for the hike back. The park officially closes at sunset so you may want to park across the road.

Map of trails available at:  http://www.parks.morris.nj.us/parks/pyrmtnmain.htm

Our thanks to the many concerned local citizens whose efforts have preserved Pyramid Mountain and Tripod Rock for future generations. May the spiritual energetic blessings flowing from the Rock bring protection and enlightenment to all beings. 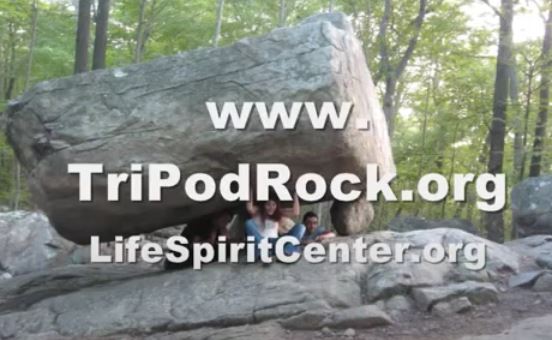 Please email (with Tripod Rock in the subject line) additional information about the Rock, including your experiences with it, so that we can update this page. If you want to link to this page, please use www.tripodrock.org. Thank you.