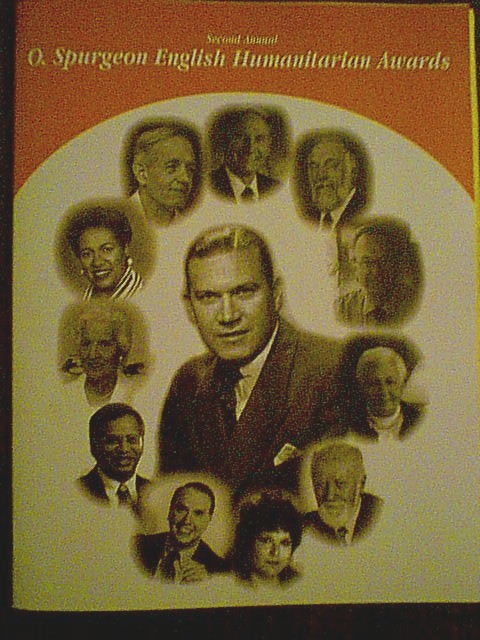 A Meeting of Beautiful Minds...

Photographs of the Awards are linked below.

The Humanitarian Awards are named in honor of Dr. English, for 34 years, head of the Psychiatry Department at Temple University, and are granted to leading physicians and scientists who have made major humanitarian contributions to human welfare.

SHRI is especially appreciative to Clancy D. McKenzie, MD and all those involved in sponsoring, creating and conducting the 2002 Awards for recognizing Sharry Edwards (

http://www.soundhealthinc.com/), founder of BioAcoustics, as part of such an extraordinary gathering of luminaries in the most advanced areas of medical and scientific research. Both the National Foundation for Alternative Medicine (http://www.nfam.org/) and Capital University of Integrative Medicine (CapitalU) were well represented at the gathering.

The event included a day-long series of presentations and discussions at Temple University in historic Philadelphia, culminating in an Awards Dinner where the recipients were awarded metals and proclamations. Each received the acclaim of the audience.

To this observer, the most exciting moments were those of intense intellectual interaction among those present. During the breaks in the agenda, the honorees exchanged their thoughts and visions with the attendees in ways that will stimulate research and thinking for years to come.

Pictures are posted below:

After banquet conversations, Dr. Nash and others -

PS - A few years ago Kathy announced to a gathering of alternative minded friends that she was tired of "our" manifesting a world in which good things like chocolate were "bad" for you and bland things like soy were "good" for you, so she decided that should change... and, as we know, now the possible dangers of soy are being discussed, while chocolate is becoming a health food!

When we were at the above noted Awards Dinner with Sharry Edwards, Kathy had a chance to relay her message to Dr. Tiller and his wife. They too agreed that a chocolate friendly world is just the place to be!