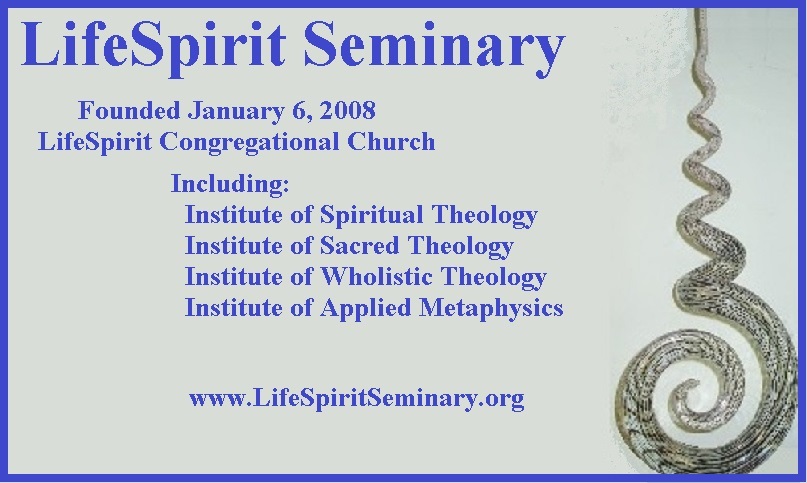 How to become a LifeSpirit Minister Practitioner

Ministry Training is handled by the LifeSpirit Theological Seminary
Through the Lightwing Ordination Program.

The Seminary home page is: www.LifeSpiritSeminary.org

In 1974, after a series of private Symposia at the University where several of us were or had been students, a small group of incipient New Agers formed what has become the LifeSpirit Congregational Church (until 1985, Libertarian Congregational Church) -- the LifeSpirit Collaborating Congregations, LifeSpirit Church or LifeSpirit Organization. Founding Trustee Rev. Ralph Fucetola JD (biogrf.htm), was, at that time, beginning a law career, representing small churches, holistic practitioners, alternative enterprises and political or social dissidents. Founding Trustee Rev. Kathy A. Greene (biogkag.htm) was beginning her exploration of alternative wellness modalities. These activities continued as the ministry grew. Our exempt status was recognized in 1975 and a Group Exemption was issued in 1976.

The Spirit of Life quickens as we enter the New Millennium. For more links on the church congregations and auxiliaries: http://www.lifespirit.org/lifesporgs.html.

By-Law XXXX, adopted in 1996, provides the procedure for becoming a LifeSpirit Minister.  If you believe sincerely that you are called by a Higher Power to minister to the sick and suffering, it is appropriate to become a "licensed and ordained" Minister Practitioner under the oversight of a LifeSpirit affiliated organization.

Lightwing Center is a LifeSpirit Local Congregation with a carefully prepared Ordination Program that can lead to Minister Practitioner ordination as a privately licensed and ordained wellness and spiritual care practitioner.

The process for Students of the Ministry:

(2) Please consider carefully whether you are called to the Ministry. The privileges and immunities of the ministry are based on long-standing legal practices and are explained in the ordination training through Lightwing.  Ordination will be denied to any who seek it for inappropriate reasons.

(3)  You may email lightwingcenter@gmail.com with "Ordination" in the subject line and your background and contact information in the email.

(4) You will be contacted with information about the ordination training program.

The Minister's Certificate of Ordination provides the following limitations and guidelines:

"The Ordained Minister Practitioner is hereby Ordained and Directed by the local congregation, under its Rules, and with the approval of the Church Trustees (who also have the authority to suspend or terminate such ordinations) under Church Rules and By-Laws, which limit the use of Church exemptions by such Ministers. The Ordained Practitioner is directed and authorized to act under the jurisdiction of the local congregation or its approved auxiliary, holistically ministering to the sick and suffering by prayer and spiritual means, so long as no drug material remedy is used, and so long as such minister is active in the local congregation. The practices of such Minister shall strictly conform to secular law."

Minister Practitioners who exhibit a real commitment to the ministry may apply for the further religious status of an Established Ministry.

(b) Any funds pertaining to ministerial activities shall be maintained in Minister Practitioner Accounts and expenditures from such accounts shall be made solely for proper ministerial expenses, stipends and allowances, pursuant to rule or resolution, or authorization of the Local Congregation Pastor(s).

Applications for Established Ministries are to be made through the Local Congregation to the Trustees of LifeSpirit Congregational Church. LifeSpirit Church teaches that forced vaccination and other imposed health care interventions violate the fundamental religious principle of Informed Consent and are contrary to the LifeSpirit.  Ministers are expected to uphold the Minister’s Code of Conduct.

The Church Fundamental Documents are here:

Rev. Ralph is President of the Institute for Health Research:  www.InHeRe.org