It may very well be that every research modality has inspiring stories of individuals who appear to have been helped by the modality. The Science, though, we are told, is in the repeatability of the results (and then one looks a little deeper and it seems many touted "standard cures" have result rates just slightly above placebo...). Thus, when apparently hopeless cases respond to new technologies, more hope is generated than by many "double blind" studies put together. This is one such inspiring story. For reasons that will become obvious, names and details have been changed - but not the story.

It begins with tragedy in a medium sized American city a decade or so ago. Some hooligans decided to raid a local mall, with baseball bats. One pre-teen got in the way. Beaten senseless and left for dead. He survived, barely, in a coma for many months. Profoundly paralyzed. When they discovered he had survived and might someday identify them, his family had to flee their home state. God brought them to Ohio, and eventually to Sharry Edwards.

Let's call the boy "Will" -- perhaps for his indomitable will to live. His devoted father saw something in Sharry's work and when they met, hoped only for some relief for Will, maybe his head would loll less, perhaps he might dribble less. After all, medical science said he was a hopeless tetraplegic. Nothing more to do. Will was lucky; almost everyone else ever beaten so badly had simply died. Sharry, Will and his extraordinary mom and dad refused to accept this verdict.

Sharry's work did support normalization of his neck muscles and even the drooling was minimized. But Will's team did not stop there. Applying good nutrition and Human BioAcoustics, Will continued to struggle. Using low frequency sound, improvements grew. Hand movement. Ability to use a computerized talking key board. The rebuilding of a shattered body.

At the 2000 Human BioAcoustics Conference we saw a video of his struggle. He stood from his imprisoning chair. We were all moved to tears. The love and care provided by his parents and other care-givers were providing him the opportunity to heal.

Will continued, indomitable. Hand movement returned. It is now the fall of 2002 -- and here is Will, standing, taking steps.

Later during this same session, Liz was able to elicit the slow return of words -- just "ma" and "fa" and "ah" at first. 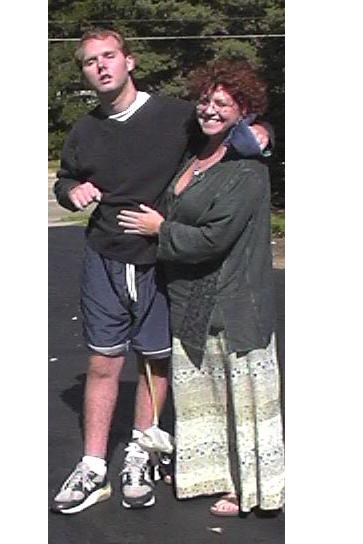 Will and Liz Longeran, an Independent Human
BioAcoustics Research Practitioner.

Please pass Will's story onward. Please pass on the hope that Ms. Edwards' exceptional work offers for people like Will.

Back to SHRI main page,